Buddy and his pal Scarlett

I got to see two of my favorites tonight. Buddy and Scarlet. What a special story they have. They were strays roaming the streets together. We don’t know when they hooked up or how long they wandered the streets. One day Buddy, the basset, was hit by a car, twice. He was gravely injured with a head injury, and down in the street. Scarlet sat down and refused to leave him.

People began to stop for the injured dog. A good samaritan got Buddy into her car and rushed him to her vet. She couldn’t bear to separate the two dogs so Scarlet was invited into her car as well. Buddy spent some time in the hospital, but recovered. The two pals stayed together through the entire ordeal.

When it came time to find the dogs a forever home, they were adopted by the same person. They just couldn’t be separated after all they had been through together. Buddy developed epilepsy and glaucoma, and both could easily have been caused by his head injuries. By this time they had become our patients. We were able to get his seizures under control, and our local ophthalmologist removed his left eye and replaced it with a prosthetic. We are watching his right eye (the good one) for changes that would indicate he is having problems with it.

Actually, Buddy and Scarlet live in my neighborhood, and I love watching them go for walks with their new family. Thanks to all involved in saving and giving these two a great life. 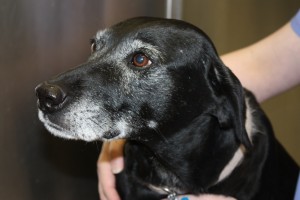